We needed to go somewhere. Get out of the house. See something different. Soak in some sunshine. Take the dog. Drive less than eight hours. Missouri checked all the boxes!

I found a nice rental on 70 acres with trails and a pond. It was quite warm several days. We got sunburned. Kayaked. Walked. Listened to the Spring Peepers and Tufted Titmice.    I was excited to see dandelions: 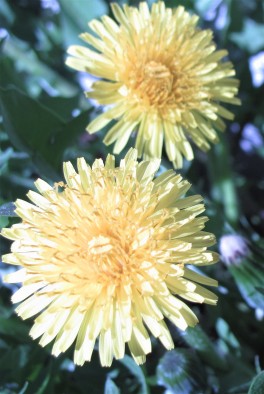 Missouri is rich in mineral resources. There are approximately 1200 underground mines; 36% are coal and 64% non-coal. The Missouri DNR website shows an iron mine near our rental. The water had an iron smell to it (we drank bottled water) and I found a number of rocks on the property with orange/red in them: 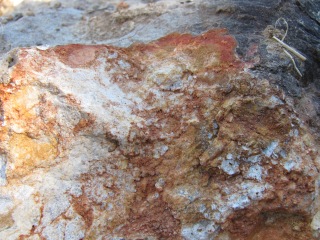 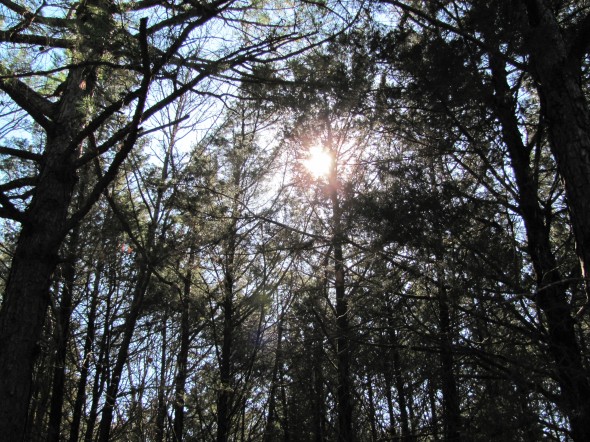 Right: Lichen on a tree. Lichens are not plants; they are a combination of a fungus and an alga.  They are found on every continent in the world. 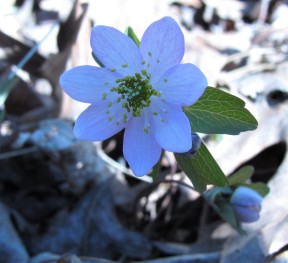 Left: Reindeer moss. It is actually a lichen. Most lichen are about 94% carbohydrates. So yes, alcohol has been made out of it.

I had never seen anything like this and later figured out it is a crayfish chimney.

Crayfish, aka mudbugs, have gills. They excavate tunnels near surface water, digging down to the water table. They are a food source to over 200 species.  The burrows, or tunnels also provide habitat for many species such as snakes, frogs, and dragonflies. More info about mudbugs is here. 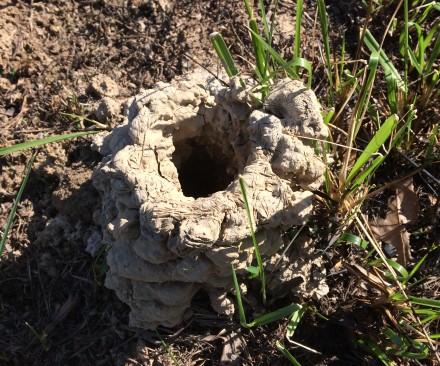 Our little getaway was FUN.

I hope your Spring is appearing in your world! What have you noticed lately?

“I prefer winter and fall, when you feel the bone structure of the landscape–the loneliness of it, the dead feeling of winter. Something waits beneath it, the whole story doesn’t show.”
-Andrew Wyeth, artist

There is a hushed and peaceful quality to winter. Of course, sometimes there is a bitter harshness to it, but doesn’t that make you feel ALIVE? What’s not to like about taking a walk in the winter, then coming inside and getting warmed by a fire, having a hot mug of tea or a dram of whisky, reading a good book, and thinking about what this world is offering you right now?

While it’s thrilling to see the daffodils popping out of the ground by the house, a sandhill crane overhead, and feeling temperatures in the balmy range on some days, I’m already missing winter. Let’s take a look back at some winter moments.

How can an icicle be crooked? 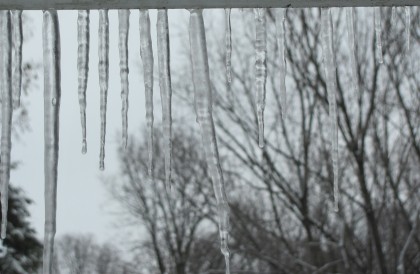 This was a GREAT day: 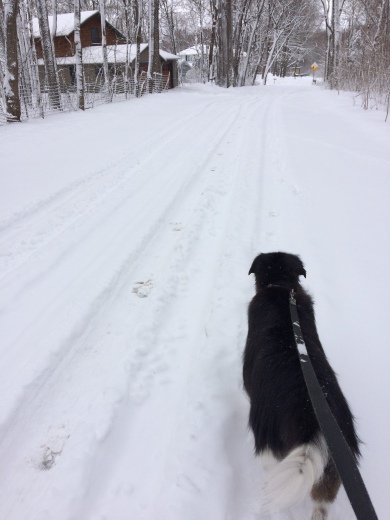 Can you see the buck?

A favorite turnaround spot for x-c skiing down a long, sloping hill:

A juvenile Red-tailed Hawk hunting for grey squirrels, perched above their nest: 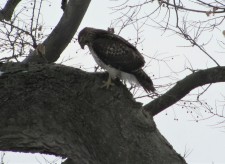 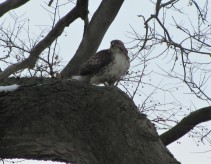 From All About Birds: The oldest known wild Red-tailed Hawk was at least 30 years, 8 months old when it was found in Michigan in 2011, the same state where it had been banded in 1981.

When cooled droplets from fog freeze and attach onto an exposed surface, rime ice is formed. This is our clothesline: 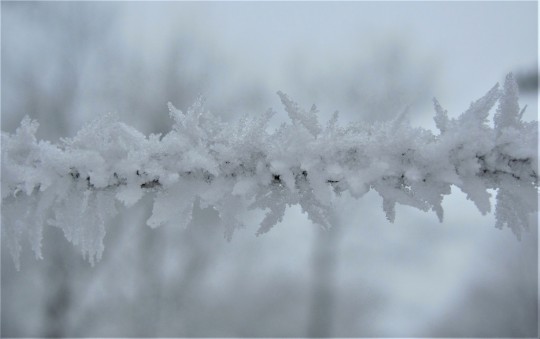 Up close – such a distinctive bark. They can live more than 350 years!

It’s the season. The ATVs are on Lake Mendota’s ice, pulling sleds of ice-fishing equipment. A few shanties have popped up and are more permanent-looking than they were a few weeks ago when the temperature was fluctuating.

I remember ice-fishing as a kid with my dad on Upper Kelly Lake in Hales Corners, Wisconsin. He would drive his pickup down the boat ramp and onto the ice, all while I was pleading with him to stop as I was certain the ice would break. He assured me that it wouldn’t. Once I got over that fear, it was a blast watching him set up and waiting for a fish to make an appearance from a hole.

The Freeze date for a lake is the first date the majority of the lake surface is estimated to be frozen at least a full day. This winter, Lake Mendota froze/closed January 3, 2021.

On average, the ice layer peaks around 19” on Lake Mendota. The thickest was around 30 inches during the 1870s. Here are the current ice levels.

Where do fish go when the temperature drops and ice blankets the water?

Most don’t go anywhere, they just adapt and slow everything down. Fish are coldblooded and can modify their metabolism to the environment.

Smallmouth bass: Bing free to share and use: https://www.fws.gov/fisheries/freshwater-fish-of-america/smallmouth_bass.html

How do fish BREATHE under the ice in winter?

A fish breathes by moving and taking water into its mouth then forcing it out through the gills. As water passes over the gills, dissolved oxygen moves into the blood. With ice on a lake, little oxygen enters the water. Fish are left to survive on what was mixed into the lake before ice, plus oxygen produced through photosynthesis if sunlight reaches the plant material. Fish also cut down on their oxygen use by moving less.

How do fish EAT under the ice in winter?

Small fish are not a preferred food for big fish during warm months because they are hard to swallow, plus small fish are effective at using structures and weed beds to hide. But big fish eat the small fish in winter. Small fish still hang out in structures or weed beds in winter but there is less cover. The big fish are in turn hanging out nearby waiting for something to venture out. Look for tip-ups, bored ice holes, and ice shanties in these areas.

All fish lose weight in winter since they can’t find enough food as in other seasons. If food supplies are really low, it can result in stunting their normal growth.

Fishermen are more likely to find food in the stomachs of fish in winter compared to warm months because digestion is slowed too. When water temperatures are around 75 degrees, it may only take a fish 24 hours to digest its food. But in winter, the same food may take a week to digest.

Some fish need even less food and really restrict their movements in winter. Bullheads tend to pass the winter buried in the sand. Carp become dormant and some catfish basically hibernate.

What is the TEMPERATURE of the water under the ice?

In summer, the temperature can vary: warm at the surface, cold down deep, and different temperatures between. Every species can spread out in search of their optimal temperature comfort zone. But in winter, the entire lake is about 38 degrees. It may even be warmer near the bottom. 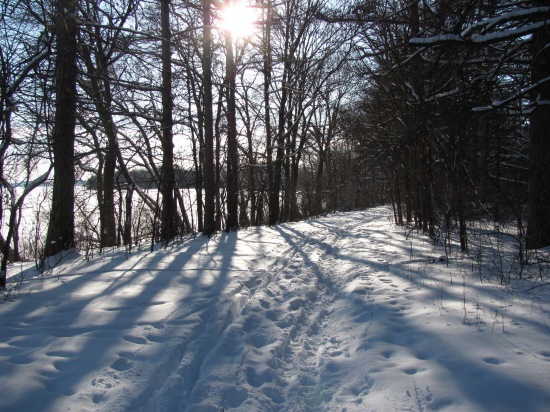 More about OXYGEN in the lake:

As winter goes on, the ice thickens, snow builds up, and underwater plants cannot get the sunlight needed. Therefore, instead of producing oxygen, they die and decompose. Fish under low-oxygen conditions search for more oxygen-rich water, such as inlets (if they are available).

When fish become stressed from low oxygen, their activity levels really drop off and feeding basically stops until conditions improve. If these low-oxygen conditions persist, winterkill may occur, killing some or all of the fish. This may be viewed as a natural process that results in faster growth rates for the survivors.

Sometimes oxygen is added to a lake to prevent winterkill through surface aspirating aerators that are placed in a hole in the ice. Trout require the most oxygen, followed by bluegill, largemouth bass, and walleye. Crappies, carp, northern pike, and yellow perch can tolerate less oxygen.

What are “drunken fish”?
After first-ice and before snow cover has had a chance to block the sun, a maximum amount of light reaches the plants below. The resulting increase of oxygen is trapped under the ice. Under these conditions, you may see fish swimming on their sides because of too much oxygen.

Any ice-fishing stories or tips? I’d love to hear them.

The Tundra swans are once again on Lake Mendota here in Madison, Wisconsin. They are very large, have a long neck, and are all white except for a black bill. They have migrated from their breeding home in the Arctic. Every winter they come; in the last seven years we’ve lived here, I documented first hearing their raucous bugling sounds late at night on these dates:

The Tundra swans usually congregate near Governor’s Island, a small green space nearby that isn’t an island anymore. Canada geese and Mallard ducks also join them and it can get truly crowded and the honking and bugling make for one crazy gathering.

Tundra swans form life-long pairs and are together year-round. They nest on the arctic tundra. They are North America’s most numerous swan species. Here is what a large flock sounds like.

Are there alligators in Lake Mendota? 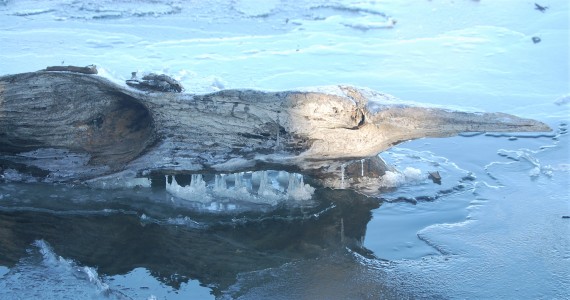 It’s the end of December, with a new year approaching. Many people are looking to 2021 with hope – hope for positive change in their lives. And many people just want to forget 2020. As I reflect on 2020, I can, fortunately, say my entire family is healthy. It was frightening for me in the early days of the pandemic and also when Wisconsin was a hot spot in October and November. And, there were – and are – some problems concerning employment, schooling, and adjustment, but overall I feel incredibly grateful for how well my family fared. 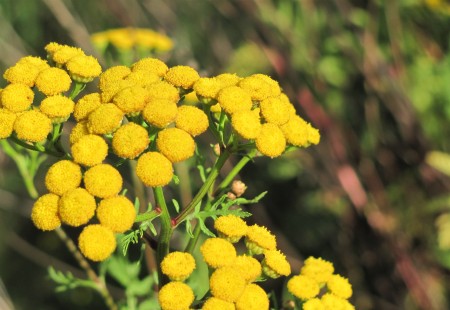 Common tansy is a non-native invasive plant! It can displace native vegetation. And here I thought it was a pretty prairie wildflower.

It will get warmer, and then colder. The trees will bud and a profusion of leaves will grace their branches. Bees and earthworms and migrating birds and dragonflies and butterflies and spiders and much, much, much more will appear in my yard and everywhere like clockwork. Winds will bring rain and hail and even smoke from fires thousands of miles away. The bald eagles will soar over the lake as the temperature drops and the lake starts freezing up. Nature is always “on” in the background.

Overall, I noticed more of nature and spent more time in nature. It is always exciting, wondrous, and restorative.

Much earlier this year, I flew to the west coast via the Minneapolis-St. Paul airport. I did not expect to see giant butterfly and moth art but there it was – in the entrance to a bathroom! (Art by Josie Lewis) The airport is apparently big on bringing arts and cultural events to their spaces. Way to go! This link includes pictures of all the mosaics.

I wish you well.

Do you know the word Odonata? I didn’t. But I recognized an opportunity to learn: it’s the scientific order of flying insects that includes both dragonflies and damselflies. 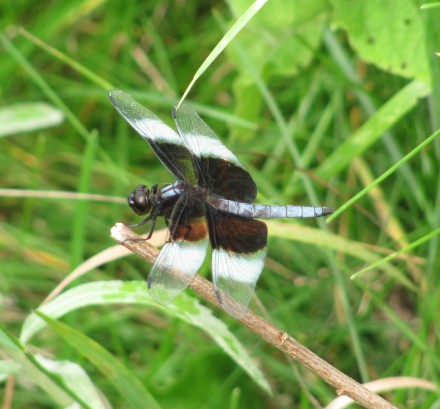 I think they are actually REALLY COOL.

They have been around for almost 300 million years! Their relatives had a wingspan of almost three feet! There are fossilized records of Odonata!

They start out in life underwater as a nymph, eating tadpoles and worms and such. Then they crawl onto land and through a metamorphosis process are flying in about a week. 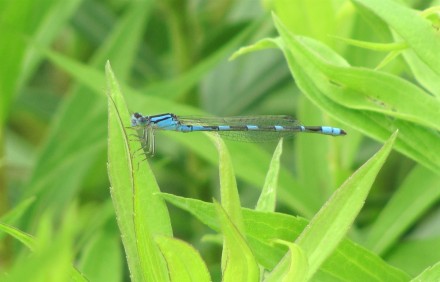 Over 160 Odonata species have been observed in Wisconsin! 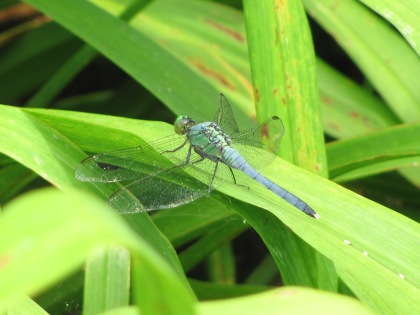 I photographed many Odonata this past summer, all in my neighborhood in Madison. There is a prairie nearby where many of them were darting about. They really are a delight.

AND, I self-published a book about them for youngsters (and others) who want to see what the most common species are in Wisconsin. Dan Jackson gratefully provided the photographs for the book. 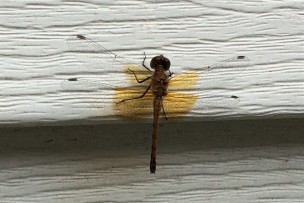 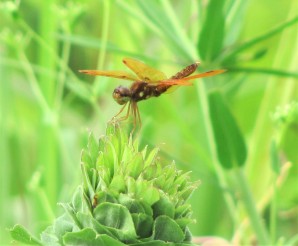 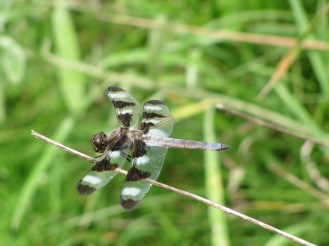 Here’s the book cover and a couple of sample pages. It’s available on Amazon and hopefully soon at the Madison Public Library. 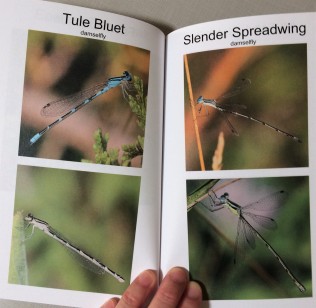 I can’t pass up taking pictures of prairie plants, so here are some of those as well. From the top: Culver’s Root, Rattlesnake Master, and Gray-headed Coneflower.

“Those who dwell among the beauties and mysteries of the earth are never alone or weary of life.”
– Rachel Carson